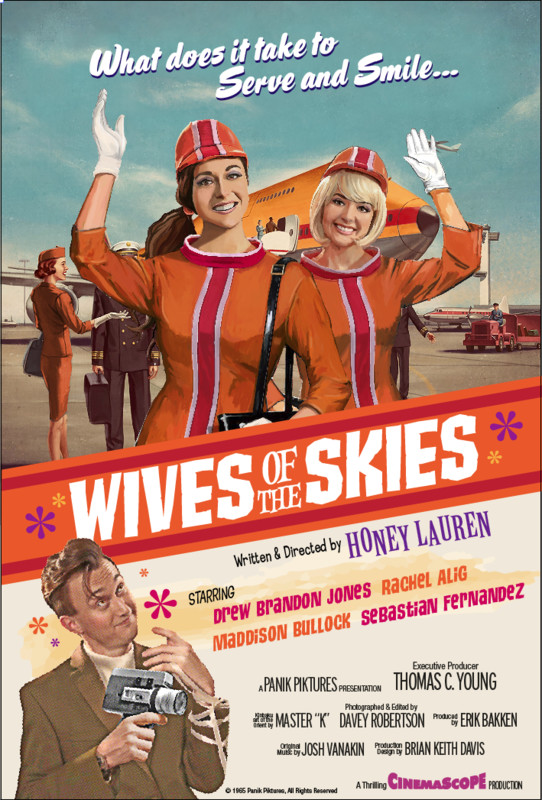 Wives Of The Skies (United States)

Wives of the Skies, set in 1965, stars two stewardesses, Fran and Marcy. Derrick, a British photojournalist interviews them as ‘subjects” for his “documentary film” and they are revealed as very different then Derrick ever hoped for or could possibly have expected. As they get to know each other, Wives Of The Skies makes a contemporary socio-cultural statement regarding the meme of “the good girl, drawn bad”. It clarifies the impact of the overarching “men’s gaze” which objectifies women as carnal sex objects men seek, while they look for love. Along the way, addressing the primitive issue of Trust vs. Mistrust, Wives Of the Skies displays the Japanese art of rope binding, Kinbaku.

Honey Lauren is a multi-award winning, writer, director and actress. She has over 80 film and television credits and has been in dozens of commercials. One journalist christened her “the female Christopher Walken”. Some of her film credits include the title role in the award winning film, MEN CRY BULLETS, which Roger Ebert called: “The best cult film of the future”, Doris Wishman’s SATAN WAS A LADY and Coppola’s DRACULA. Some of Honey’s television credits include recurring roles on HBO’s DEADWOOD, DAYS OF OUR LIVES, MANI, ALL MY CHILDREN, and COMEDY CENTRAL’S HOME FRIES, to name a few. She recently completed Paul McCarthy’s features DADDA & NIGHT PORTER and the new television shoe, BELIEVERS. Honey is also a produced and published writer. She has written for name Directors including Abel Ferrara and Mario and Melvin Van Peebles. Her feature screenplay, MISTAKE won the AOIFF and HDIFF Writer’s Award and her screenplay STRANGED, was a semi finalist in the prestigious Austin Film Festival Screenwriting Competition, her screenplay THOUGHT DISORDER and her short; WIVES OF THE SKIES were finalists at the Slamdance Screenplay Competition. Her short film, DOT GOT SHOT won five major festivals including BEST FEMALE FILMMAKER and the acclaimed, WOMAN WITH A VISION AWARD. HAPPY HANDS is Honey’s short documentary with Tippi Hedren and has won six film awards and qualified for the Academy Awards in 2014. Her short WIVES OF THE SKIES will debut in 2020.

The Moon’s Not That Great

The Moon’s Not That Great

The Day You Long For

The Day You Long For

Nacre – Sitting on the Mountain

Nacre – Sitting on the Mountain